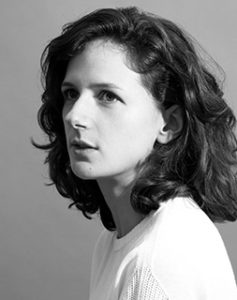 ELISA VAN JOOLEN (NL/IT, 1983) is a designer and researcher based in Amsterdam. Her approach to clothing design is characterised by strategies of intervention and reconfiguration. Her projects often reflect specific social contexts and emphasise collaboration and participation. They expose relational aspects of clothing and subvert processes of value production.

Elisa’s work has been recognised with the Han Nefkens Award (2016), Fulbright Award (2010), and nominated for the Dutch Design Award (2013) and New Material Award (2014). She has participated in shows and exhibitions at the Stedelijk Museum Amsterdam, Museum Boijmans van Beuningen in Rotterdam, New York Fashion Week, 5th Brazilian Design Biennial in Florianopolis, Museum fur Kunst und Gewerbe in Hamburg, OCAT Art Terminal in Shenzhen and West Bund Art Center in Shanghai. Van Joolen holds a BA from the Gerrit Rietveld Academie in Amsterdam (2006) and MA from Parsons in New York City (2012). She was artist in residence at Iaspis in Stockholm (2016). Elisa van Joolen teaches at the Gerrit Rietveld Academie and is visiting lecturer at ArtEZ Institute of the Arts in Arnhem. Through explaining my process and approach to footwear design, I aim to discuss how materiality affects our vision of newness. Looking at how we can embrace and imagine different norms for the lifecycle of sneakers, to create an infinite story of process and memories.

After studying BA Footwear and Accessories at the University of Northampton, where I won the Inaugural, Worshipful Company of Cordwainers, Footwear Student of the Year Award, I went on to study my MA in Footwear design at The Royal College of Art. There I developed my practice exploring unexpected constructions within footwear. Investigating extreme constructions and textures. My work aims to conceptualize our connections with commerce through materiality and structure. For my graduate collection I created a series of bespoke sneakers, evaluating process, ownership and obsolescence. With this collection “our public youth” I won the ITS Vogue Talent Award, and ITS Accessories award. Since receiving his MA degree in Fashion Design from the Royal Danish Academy of Fine Arts, School of Design in 2008, Ulrik Martin Larsen has worked in a number of fields connected to fashion, art and performance. Operating at the cross section where performing arts and fashion meet with an emphasis on body, movement, object and performance he has participated in several international exhibitions. In 2011 he formed the artist collective PUTPUT working with conceptual still life photography, sculpture and publishing.

Numerous collaborations with choreographer and dancer Tim Matiakis for Cross Connection Ballet Company and The Royal Danish Ballet have lead to a focus on costume design and dress as scenography for contemporary dance and modern ballet. This specialisation instigated his research at The Swedish School of Textiles, where he completed his PhD thesis Dressing Wearing in 2016.
www.ulrikmartinlarsen.com
www.putput.dk

D&K (also known as Dolci & Kabana)
Title: All or Nothing

D&K is a critical fashion practice, sitting outside of the commercial context of fashion and operating primarily as practice-based research exploring key political, social and cultural concerns that affect fashion. The acronym D&K is often used interchangeably with the full practice name ‘Dolci & Kabana’, a play on the name of the well-known luxury brand ‘Dolce & Gabbana’.  The project considers all of the constituent parts of a fashion brand, focusing on unraveling the tropes, clichés and gestures that underlie these elements. Using strategies of institutional critique, D&K plays with the elusive quality of high and luxury fashion, as well as exploring the other end of this spectrum – the diffused and mass-produced product.  D&K uses a range of traditional and non-traditional mediums to critically explore fashion such as garment collections, performance, writing and video.

D&K is based in Melbourne and has exhibited in Australia and internationally. In 2014 D&K was the recipient of the Han Nefkens Fashion on the Edge Award and featured in the group exhibition “The Future of Fashion is Now”, curated by José Teunissen at the Museum Boijmans van Beuningen, Rotterdam. This exhibition toured to OCT Art & Design Gallery, Shenzen, China in 2016 and D&K were invited to participate in the opening program. Other recent projects include: “Fashion & Performance: Materiality, Meaning, Media” (2015)curated by Jessica Bugg and Anna-Nicole Ziesche, RMIT Design Hub; “CFS USA Tour” (2015)curated by Centre for Style, Chin’s Push, Los Angeles, USA; “MCA Artbar, Twentieth Edition” (2014)curated by Chicks on Speed, Museum of Contemporary Art, Sydney;“Lifestyle Concept” (2014)curated by Daine Singer, Daine Singer Gallery, Melbourne; “effortless beauty takes a lot of effort” (2013) in “Arcades”curated by Centre for Style, Bus Projects, Melbourne. Annegien van Doorn (Vlissingen, 1982) is a visual artist and photographer. In her work she investigates the banal, the everyday and the obvious. She focuses on seemingly meaningless situations. By isolating and manipulating these situations, small events transform into the monumental and the familiar becomes something extraordinary. She plays with reality in order to create a new perception of the real world. Can we re-enact the experiences and histories of others? Are there ethical implications when affect becomes a design material? Can dance improvisation refine and expand the performative methods already used in interaction design?

These questions are starting points for this keynote emphasizing the applied qualities of performativity and phenomenology, where ‘applied’ refers to the potential for practical and material performances of bodies, memories, and data.

Susan Kozel is a Professor with the School of Arts and Culture at Malmö University exploring the convergence between philosophy, dance and media technologies. She has an active artistic practice and has published widely on topics from affect to archiving, ubiquitous technologies to electronic music. She teaches for the Interaction Design program and is Project Leader of the major research project Living Archives funded by the Swedish National Research Council. Publications include the monograph Closer: Performance, Technologies, Phenomenology (MIT Press 2007); and shorter articles “Process Phenomenologies” in Performance and Phenomenology (Routledge, 2015), “Somatic Materialism or Is it possible to do a phenomenology of affect?” in Site Journal of Art, Philosophy and Culture (2013),“AffeXity: Performing Affect using Augmented Reality,” in Fibreculture Journal (2012) and “Devices of Existence: Contact Improvisation, Mobile Performances, and Dancing through Twitter”, in Improvisation and Social Aesthetics, eds. (Duke University Press, 2016). Current research considers the politics, philosophies and embodied practices of Affective Choreographies.